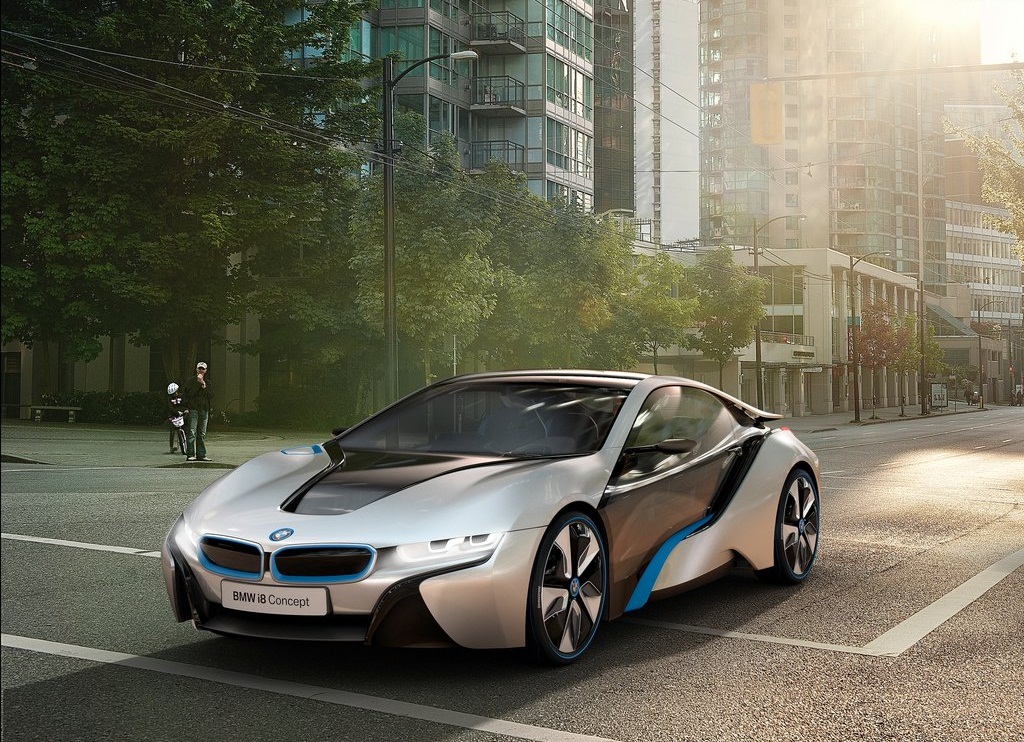 BMW i8 Concept is a sports car of the most contemporary variety: forward-looking, intelligent and innovative. Its unique plug-in hybrid solution brings together a combustion engine and an electric drive system to create an extraordinary driving experience complemented by extremely low fuel consumption and emissions.

The BMW i8 Concept and the fascinating approach that underpins it embody the vision of a sustainable contemporary sports car brought to life. Its innovative plug-in hybrid concept combines the modified electric drive system from the BMW i3 Concept - fitted over its front axle - with a high-performance three-cylinder combustion engine producing 220 hp (164 kW) and 221 lb-ft (300 Nm) at the rear. Working in tandem, they allow the two drive systems to display their respective talents to the full, delivering the performance of a sports car but the fuel consumption of a small car.

BMW i8 acceleration of 0 to 60 mph in under five seconds combined with fuel consumption in the European cycle of under three liters per 100 kilometers (approx. 94 mpg imp) are figures currently beyond the capability of any vehicle powered by a combustion engine of comparable performance. Thanks to its large lithium-ion battery, which can be charged from a domestic power supply, the BMW i8 Concept can travel up to 20 miles (35 kilometers) on electric power alone. Added to which, the 2+2-seater offers enough space for four people, giving it a high level of everyday practicality.

The most BMW i8 impressive feature of the new concept is the upward-swiveling doors fixed to the A-pillars that underline the car’s sporting capability and opens up access to the front and rear seats at the same time.

At the front of the i8 there is a stylistically modified and strikingly individual update on the kidney grille theme, with a blue background, distinctively shaped LED headlights at the outer edges of the front end, and the absence of the large cooling air intakes.

The BMW i8 features a transparent roof that reveals the intricate CFRP structure of the roof, but at the same time offers an optimum view out of the cars and allow the passengers inside to experience the outside world while on the move.

The BMW i8 interior combines the same sporty character of the exterior with state of the art technologies. The BMW i8 features one of the most impressive driver-focused environments that has ever been offered in a BMW vehicle. The purpose-built driver’s position is geared squarely towards the person at the wheel and gives optimum access to all information and controls. The three-dimensional displays are crystal clear and flash up the relevant information for the driving situation at hand.