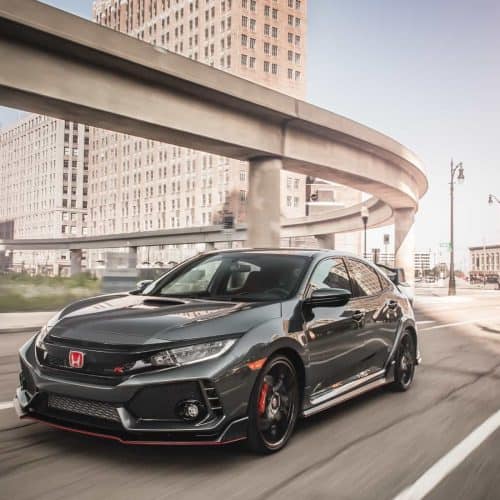 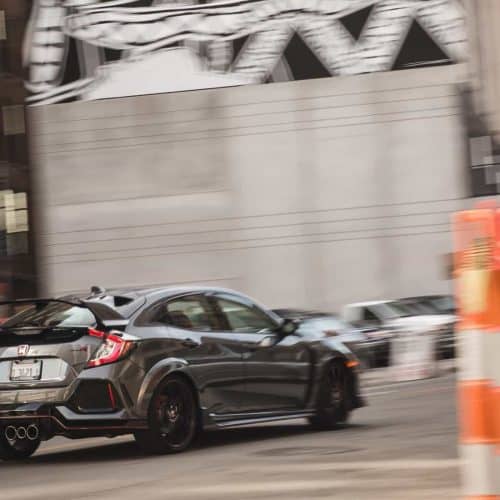 2017 Honda Civic Type R is finally heading to American shores. Was it worth the wait? The specifications say yes. Honda fanboys and fangirls, your patience has been rewarded: For the first time in the U.S., the Civic Type R is here, and it’s glorious. A 306-hp turbocharged 2.0-liter inline-four with a six-speed manual transmission and front-wheel drive is the only powertrain. A front-strut suspension—Honda calls it dual-axis—eliminates the torque steer normally associated with high-powered front-drive vehicles. Navigation, Apple CarPlay, Android Auto, and a 540-watt 12-speaker stereo are all standard.

2017 Type R was good from our first experience on the less-than-perfect roads of Quebec, Canada. Here, though, are the headline facts from this instrumented test: Zero to 60 mph in 4.9 seconds, 1.02 g of lateral grip, and the ability to stop from 70 mph in a Porsche-like 142 feet—in a tweaked, front-wheel-drive commuter car with 61.8 percent of its 3111 pounds resting on the front wheels. So, yeah, extremely solid.

What sets this Honda apart from other sport compacts is how it balances speed, body control, and outright cornering prowess with the day-to-day ride comfort that you would never expect given its rubber-band-like 30-series tires. Indeed, those 245/30ZR-20 Continental SportContact 6 performance treads offer seemingly no cushion for the spindly 20-inch aluminum wheels, and they’re pricey at $320 a pop. Yet, despite having significantly stiffer springs, dampers, bushings, and anti-roll bars than even the new Civic Si, the Type R traverses pockmarked pavement better than nearly any other car with this much stick. Even with its driving-mode selector in its full-attack +R setting—which slightly weights up the steering over the lesser Sport and Comfort modes and puts the three-position adaptive dampers in their firmest tune—the ride is fully livable. Combined with a high level of standard amenities and wonderfully comfortable and supportive sport seats (available in red cloth only), there’s little compromise to having a Type R as your sole mode of transport.

Designed from the start for the U.S. market, though sold globally, the 2017 Civic Type R slots nicely into our vehicular landscape. Its $34,775 asking price is considerably more than those of lesser front-drive sport compacts such as the Ford Focus ST, the VW GTI, and Honda’s equally new Civic Si, yet the Type R is thousands less than its AWD performance peers. Even with its fast-and-furious styling that looks ready to sprout a mohawk in traffic, this thoroughbred Civic is the hard-core hot hatch we’ve been waiting for.