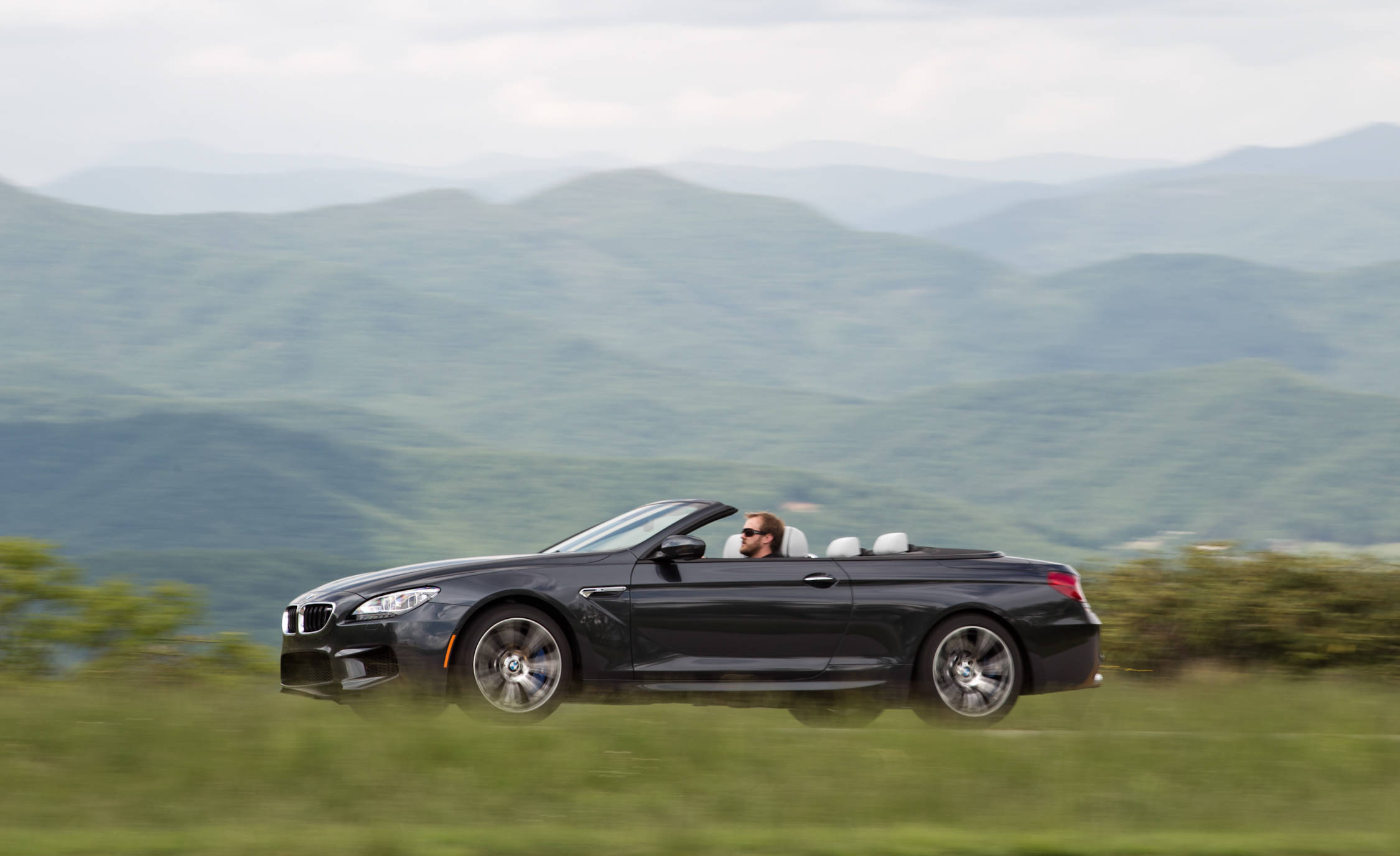 After two years without one (how did we survive?), the BMW M6 convertible will be back in showrooms in late June. “It's the fastest convertible we've ever made,” said M brand manager Matt Russell. If you measure “fastest” by top speed, BMWs have been electronically limited to 155 mph for some time, which is pretty fast. But if you look at 0-to-60-mph times, it should take just 4.2 seconds, a few tenths quicker than the old model. The M6 also does it more efficiently, with a 30 percent mileage improvement.

Sharing most componentry with the M5 sedan and its triplet, the M6 coupe--both coming later this summer--the new M6 convertible adds glorious top-down hightailing to the performance of its tin-topped siblings. The new drop-top gets the same meat-eating 4.4-liter twin-turbo V8 as the M5 and M6, which hit 560 hp from 5,750 rpm to 7,000 rpm, while peak torque lays across a long, ludicrously flat 500-lb-ft plateau, from 1,500 revs to 5,750 revs. Power goes seamlessly through a seven-speed M dual-clutch transmission and thence to the Active M differential, an electronically controlled multiplate limited-slip unit. Just about everything in the powertrain can be electronically controlled through a phalanx of driver-prescribed settings. It's like being your own powertrain engineer.

Together with the M5 sedan and the M6 coupe, the body into which this powertrain is bolted is “the stiffest and most rigid we've ever made,” Russell said. BMW is very proud of the fact that the rear subframe is bolted directly to the chassis, with none of those soft, squishy bushings to sap performance. BMW uses more ultra-high-strength steel for stiffness, combined with damper technology that has advanced enough to make such a stiff structure driveable every day. (Interestingly, while going on at length about how stiff the whole thing is, BMW would not quote any figures for torsional rigidity or bending resistance that even the lowliest Saturn lists.)

The power soft top can be raised or lowered under way at speeds up to 25 mph and takes just 19 seconds to go down and 24 to go back up. A fairly useless glass wind blocker raises above the rear seats.

Yes, that is a very powerful, very torquey engine and, yes, the dual-clutch transmission is easily the quickest, smoothest-shifting unit ever bolted into a Bimmer. But the beast still weighs 4,508 pounds, the heaviest of the M5/6 triumvirate. So it's not a sports car and it maybe even outweighs the sporty two-door moniker.

So what is it? It is the most-tied-down gran tourer ever made, how about that title?

You can program in three modes of engine-throttle response, three modes of damper stiffness, three different steering weights, three shift programs and three settings for the stability control. You can store two of these complete custom settings and recall either of them instantly with the touch of the two M buttons on the steering wheel, M1 and M2, instantly prepping the M6 convertible for action--or inaction, depending on your preference. In addition to that, there are still more settings for various comfort and sport parameters available, too.

We spent a thoroughly thrilling afternoon driving an M6 convertible in the hills above Santa Barbara, Calif., and tried them all. The sport-plus setting for throttle response was almost too quick and required a big adjustment to driving style to master smoothly. The steering settings just seemed to add some weight to the system without changing the actual feedback to the driver's fingertips. The comfort setting for the dampers was still a bit stiff for daily commuting, but this is an M6, after all, so that's what buyers want.

That broad torque plateau was most impressive in passing maneuvers, ladling out torque in huge dollops at the touch of the throttle. Off the line, a launch-control program helps get you that 4.2-second 0-to-60-mph time.

But regardless of how brilliantly BMW engineers have integrated all of this power and managed all of this torque, the car still weighs more than two tons. It is a gran tourer, but the emphasis is on the gran.